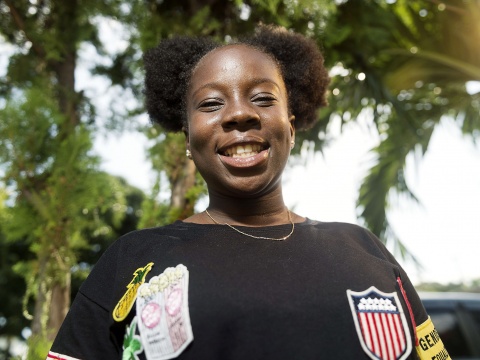 Being a young and precocious baby, Angelee Bennett showed no major signs of ill health in her infancy, until she became three years old. “I got a call from her basic school teacher one day, who said she started to vomit, so I had to collect her and take her to the doctor,” reminisced  Marlett Bailey, Bennett’s mother.

At first, the doctor said Bennett was dehydrated and recommended rehydration salt and panadol as a suitable remedy. Unfortunately, this did not improve her situation as her eyes became yellow and her illness got worse. As a result, she was  admitted to May Pen General Hospital after which she was transferred to UWI Hospital, by ambulance.

“My daughter’s condition was getting worse and i got so nervous. We arrived at May Pen Hospital in the morning and i stayed until they told me it was getting too late and i had to leave. When i got home, i couldn’t sleep so my 22 -year-old son and close family had to comfort me,” remembered Bailey.

Dealing with the new reality

It was at UWI Hospital where her mother got the unfortunate news that Bennett was suffering from Renal failure, also called Kidney failure. This is a condition where the kidneys are not functioning properly and toxins are not being removed efficiently from someone’s body.

To address Bennett’s issue, a catheter was placed in her abdomen at age three and she was put on a peritoneal dialysis machine in a bid to normalise her kidney function. Even though this was successfully done, her doctors could not figure out how to lower her blood pressure throughout this entire process. Subsequently, she was constantly in and out of the hospital for a year, with her longest admission period being three consecutive months.

“It was a painful process and i was very sad and scared, especially when i saw the tube in my stomach. But i remember the nurses doing everything to cheer me up, they even made me paint on their faces,” recollected Bennett.

Despite not remembering all the details of her admittance, there are key moments Bennett said she would never forget. “In the theatre, i did a surgery to remove the catheter and the doctor gave me an anesthetic mask and told me to blow into it like a balloon. When the surgery was over and i woke up and didn’t see my mother, i started crying loudly.”

During this period, Bennett was out of school for over a year, but her mother was determined not to have her fall behind. “I would get notes from her school and practice with her at her bedside during the days,” stated Bennett’s mother.

Still Trying to find a solution

After a year of constant tests, the specialist told her mother they could not find a solution for her elevated blood pressure.

At first, the news was discouraging for the family. However, her  mother immediately put
plan ‘b’ into action and took her to New Jersey,United States Of America, to try a new approach to the situation. “Angelee’s aunt, Ann Forbes, who has been super supportive, especially financially, from day one, told me to bring her up if the situation wasn’t improving. Plus her father lives in the states so i felt comfortable with the support system there,” revealed Bennett’s mother.

She was under observation there by a Nephrologist and started responding positively to the medication. After two months, her blood pressure had normalised and her doctor felt comfortable returning her to Jamaica.

After finishing basic school at five years old, her next obstacle was to find a school at the primary level that had an environment that was sensitive to her condition. “I was searching far and wide for a school until i found SOS Herman  minor prep, where the school body was so caring and understanding. Sadly when Angelee was in grade 4 the school closed down,”revealed Bennett’s mother.

This meant, they had to go on another arduous search, which lead them to Stony Hill Primary, where Bennett excelled both socially and academically. “I loved it there, my classmates were so supportive. Plus i had the best teacher every! Mr. Mark Brown. He took the time out to understand our different academic needs which helped all of us to do very well at GSAT,” said a jovial Bennett.

Now a second-form student at Holy Childhood High School, Bennett’s days consist of her taking 10 tablets along with drinking a lot of water. “At all times i prefer to be treated normal, so i don’t go around with a pity party for myself. I alway try to remain positive, so much so, sometimes i forget that i have a kidney disease,” stated Bennett.

For her, the medical routine is a minor setback when she thinks about the enjoyment of attending school and doing her favourite subject. “I love doing French, i really look forward to the classes and i have a really nice teacher. My french grade has never been anything less than 90 per cent and I plan to keep it that way,” declared Bennett.

As it pertains to her future profession, the socially-conscious Bennett isn’t quite clear what she wants to become but she is certain she wants to give back to kids affected with kidney disease. “I am not fully certain what i would like to be, but i have a vague idea, a pediatric nephrologist. Because of all that i went through as well as the support i have gotten from Ja Kidney Kids family. I think all of this  puts me at an advantage to relate to kids suffering with kidney disease,” concluded Bennett.

“In the theatre, i did a surgery to remove the catheter and the doctor gave me an anesthetic mask and told me to blow into it like a balloon.

At all times i prefer to be treated normal, so i don’t go around with a pity party for myself. I alway try to remain positive, so much so, sometimes i forget that i have a kidney disease,”

“I got a call from her basic school teacher one day, who said she started to vomit, so I had to collect her and take her to the doctor,”

Above it All,  highlights youth who have found a way to persevere despite experiencing extenuating circumstances.

Look out for Anastasia’s story in next week’s Youthlink

“Growing up she wasn’t there for me, she was always going out with different men, this must have been why my grandmother took me in.”

Air Jordan 1 Mid "What The Multi-Color" For Sale