Above It All Interviewe gets recognized 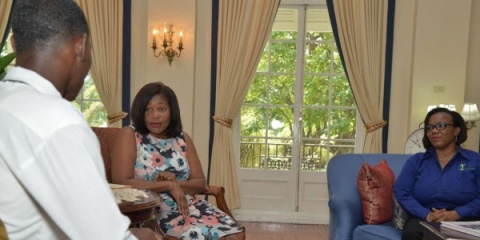 Earlier this year, The Gleaner’s Youthlink published a dynamic set of stories in a weekly series, Above It All, featuring extraordinary teens who have overcome extenuating challenges.
The response to the series has taken various forms but for one interviewee, his recognition took a distinguished tone.

Percy B Aiden’s* story was published on February 6, 2018 and picked up the attention of Lady Allen, the Governor General’s wife, who has offered to assist the youngster.

Aiden killed his cousin at thirteen years old after a game of football went south. He spent time in juvenile detention where he excelled academically and socially. Later pardoned by the Governor General, Aiden is now enrolled in college.

Lady Allen’s assistance came in the form of school support for the changed young man, including a donation of a brand new laptop and accessories. The handover was made at Kings House, recently. Lady Allen says she knew Aiden before the article.

“Miss Simms (Sonja Simms, Press Secretary) sent the story to me because of the pardon part of it but she didn’t know I knew Aiden before,” she said. “I was familiar with the story because when I came to this office, this was not a job we applied for; I said to myself you can either make yourself miserable or you can use the platform to help people.”

An educator for 25 years, Lady Allen says she uses her platform now to assist young people whenever she can. Through her I Believe initiative, she has been privately doing so with a number of younger Jamaicans and is now formally pledging to assist Aiden as well.

“My husband (had) this consultative breakfast where we spoke to people and the three areas that kept coming up were education, family and youth. That’s how the I Believe initiative started, upon these three pillars,” she said.

Of Aiden, she recalls, “I visited Hill Top (correctional centre where he was detained) with First Regional and Mrs Pat Smith. They had needed a washing machine and they didn’t have an electric iron so the day we arrived  with the items these young men, including Aiden, came up quite creatively with a song in no time that ‘no more scabies’.”

She explained, “Because Hill Top is cold, their clothes don’t dry well on the line and they used to get rashes on their skin so they are singing that they are not going to be having anymore rashes.” She says reading the  Youthlink article allowed her to reconnect with Aiden, having reached out to author of the series and Coordinator, Kareem LaTouche for his contact.

“I called him (Aiden) and spoke to him,” she said. “When I help these kids, people always ask me what they did and I say, ‘I never asked’. To me it’s not important what they did, it’s taking them to a different place.”

Attributing the welcomed coincidences in getting help for Aiden to God’s work, Lady Allen tells The Gleaner, “He told me his story and he gave me his bank account number and I sent him some money to take him through school.”

She says, “Then, I was at a meeting sitting beside the President of the Court of Appeal, Justice Dennis Morrison and he just said to me ‘How’s your work going on with the kids?’ I said, right now I have a kid that needs a laptop and he said ‘I can help’. You see how the holy spirit work?”

She gave Justice Morrison Aiden’s number, per his request, so he could get to know the youngster.

“He called him and said to him, ‘This is Dennis’,” she remembers.

“I called him (Aiden) and said to him, ‘Did the President of the Court of Appeal call you?’ He said, ‘I got a call from Dennis’ and I got mad at him. I gave him the little talk and said this is how you address him,” she recalls, laughing.

The marginalized male
Given the issues of underperformance among boys and social stigmatisation, Lady Allen is especially pleased to be able to help some of our males.

“It’s a feeling that money cannot give you,” she said. “All these years, I’ve been working with young people and I’m married to a strong man so I have this passion for young people, especially the men who are marginalized.”

Pull quote 1 - “When I help these kids, people always ask me what they did and I say, ‘I never asked’. To me it’s not important what they did, it’s taking them to a different place.”

Pull quote 2 - “It’s a feeling that money cannot give you. All these years, I’ve been working with young people and I’m married to a strong man so I have this passion for young people, especially the men who are marginalized.”