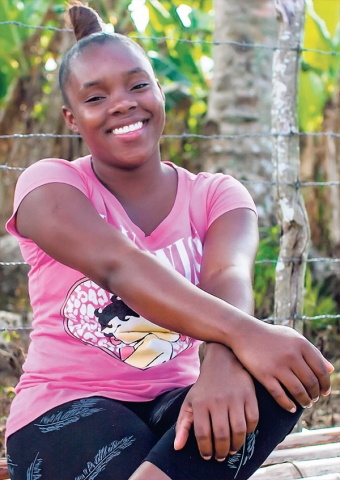 For much  of Daidrian  Laing’s  academic life, she  had been an astute  student who also  took pride in  being involved  in many extracurricular  activities.  Perhaps one of  the greatest  accomplishments for  the former Knox College High  School student was  being on the  school’s honour roll  for three consecutive  years. A feat which  required exemplary  mannerisms as well as an  above-80 per cent average.  “I was on the honour roll  from grade eight, which is  something that I was very proud  of, because I tried really hard,”  she stated.

Growing up, the St Ann resident  had never met her father who lives  in the United States, and realised  from an early age that education  would be her only means of  escaping the biting hands of  poverty. “It was very clear that he  had no interest in being a part of  my life, so I had to do the best with  what I had,” Daidrian shared.  Living a very average life, she  tried to maintain a sense of  balance. This included having a  high-school boyfriend two years  older than herself, whom she  started talking to when she was in  third form. “We were always good  friends and he was very kind and  respectful to me. He never  pressured me to have sex; he  always told me I didn’t have to do  anything until I was ready,” she  declared.

“Towards the last few months of  my fourth-form year, I decided to  go ahead. I didn’t have a lot of  knowledge on sex at the time, plus  my period was very irregular, like  five months apart, which, looking  back now, I didn’t think I was  ovulating. We ended up having  unprotected sex, which was not a  good thing to do,” she disclosed.  A few weeks later, she began to  experience morning symptoms,  which at first bewildered her. “I  felt very dizzy in the mornings and  I knew something was not right, so  one morning I went to the  pharmacy and bought three  pregnancy tests. By lunchtime, I  got the courage to use them.”  As she looked at the test and saw  the two strokes which represent  being pregnant, she immediately  lost her composure. “I started  crying first, then I told my best  friend and she and I started crying.  I remember everybody looking at  us and asking what happened. The  next person I told was my  boyfriend, who kept telling me not  to do an abortion and that he would  support me.”  With her pregnancy status  confirmed, the next daunting task  Daidrian faced was confronting her  mother with the information.  Ironically, her mother had had her  own premonitions which she linked  to symbols from her dreams. “She  kept asking me if I was pregnant,  because she saw fish in her dreams  and it meant pregnancy, but I was  so afraid and shame, so I lied and  said no.”

Having continuous suspicions,  her mother took her to a doctor  during the summer to get tested.  “My mother kept saying on our  way to the doctor, ‘Don’t let me  waste my money if you know you  are pregnant’, but I was so afraid to  tell her the truth. Finally, after the  doctor examined me, he found out I  was five months pregnant. He also  warned me not to consider an  abortion because the pregnancy is  too far [advanced] and it could be  life-threatening to me.”  With such astonishing news,  Daidrian’s mother was consumed  with anger on their way back  home. “She kept shouting at me. I  knew she was frustrated, she had all the right because it was she  alone, as my father had never been  interested in me. Even so, it was  hard, because she was saying some  real hurtful stuff as we walked  through the town.”  Another sad reality for the young  girl was the fact that her  community soon found out. At that  point, her daily journey was  likened to the famous walk of  atonement by the lead antagonist,  Cersei Lannister, in the HBO hit  series Game of Thrones. During  these periods, she had to endure  cascading criticism that  pronounced shame and failure over  her life.  “There were a few persons in my  community who made me feel so  ashamed. They kept telling me how  horrible I was. I had to leave for a  while to clear my mind.”  To make matters worse, her aunt,  with whom she was living at the  time, insisted that she could not  stay in her house any longer.  Consequently, Daidrian moved to  Montego Bay, where her mother  worked.

“As we moved to MoBay, I went  to Catherine Hall clinic to do my  check-ups, but given that I was 16,  the nurses were adamant that my  mother enroll me in The Women’s  Centre. They even threatened to  call the police on her, stating that  when girls get pregnant, they  usually drop out of school and then  their lives fall apart.”  Following the nurse’s advice, she  went to The Women’s Centre at  Brandon Hill, where she enrolled  and started school in September  2016. Immediately, she felt  comfortable in her new  environment as many persons  supported her. At first, she was of  the impression that she would  delay doing her exams for one  year. However, after seeing her  outstanding school report, her  principal insisted that she join the  fifth-form programme and do  seven subjects at the Secondary  Education Certificate level in May  of 2017. These are standarised  examinations done at grade 11 in  16 participating Caribbean  countries.  Using a distance-education  programme, students were given  laptops to view their teachers and  take notes, which was a very new  experience for Daidrian. “It was  something different, but it worked  and we, as girls, really appreciated  getting a second chance to do  something great.”  Nonetheless, she still had to  endure financial challenges along  with the discomforts that came  with pregnancy. “Things were  really hard on me financially, so I  had to miss some days here and  there. In December, I had to miss a  lot of days because my body just  wasn’t coping well. I was feeling a  lot of discomfort and cramps.”

Trying to maintain a balance

Fortunately for Daidrian, she had  developed some meaningful  friendships at the institution, and  those friends showed up at her  lowest moments. “My friends came  and visited me every day (that) I  was absent. They made notes for  me, as well as went over the  various subjects so I wouldn’t get  left behind.”  This trend continued until  February 2017 when Laing gave  birth to a healthy boy weighing  seven pounds and 12 ounces. “The  baby was overdue. I should have  given birth in January, but I guess  God had other plans. After this, I  was out of school for two weeks,  so I was a bit concerned because I  knew I was going to have to make  up for all the time lost.”  Once she returned to The  Women’s Centre, Daidrian doubled  down on her studying, making the  most of the two months she had  left before her exams. “Going into  the exams, I had to be realistic. I  knew I wasn’t as prepared as I  could have been. I was even  thinking I shouldn’t have done  seven. I should have done less. All  kinds of doubts were entering my  mind, but I said I am going to do  the best I can.”  After the exams were finished,  the new mother waited patiently  for two months before receiving  her results.

The fruits of endurance

“I was so surprised when I found  out I passed seven subjects with  four ones. To be honest, with  everything that was happening, my  confidence was so low when I was  sitting the exams.”  Daidrian has now returned to her  old community, where she is  viewed differently. “Some of the  persons who were cursing me, their  kids never passed any subject, so  they have a renewed respect for  me, knowing that I did it while  carrying a child.”  With this monumental hurdle  behind her, this determined young  woman remains optimistic about  her future as she plots her next  move. “Even though I would love  to further my education by  attending a college, it’s just not  realistic because I don’t have the  financial support, so now I am  aggressively searching for a job.”

Laing admonishes teens’ lack of  sexual education and encourages  them to make sensible decisions on  the matter of sex as much as  possible. “Teens need to be  informed, because one day they  will become adults and have to  make a decision to have sex, and  this knowledge will guide them to  do it the right way.”  She also implored schools to  teach kids the unadulterated truth  about sex, rather than the  traditional approach which usually  dabbles in utopia. “Don’t pretty up  things; let the students know what  is really happening out there,” she  emphasised.