Jamel refuses to let sickle cell slow him down 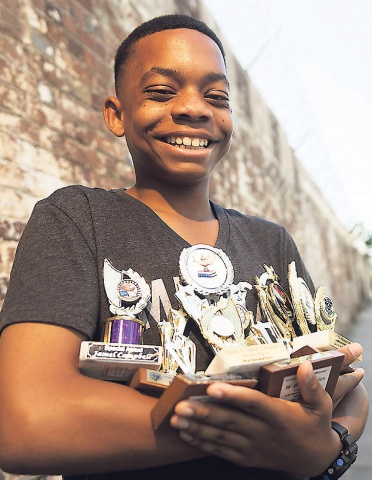 As part of a regular prenatal-care  procedure, Janet Campbell, Jamel’s  mother, was instructed by her doctor  to do a test for sickle cell while in her third  trimester. This was something the Lawrence  Tavern resident was unfazed by at the time,  because she was certain she did not carry the  sickle cell trait. At that time, she had never  been told by a doctor before that she had  sickle cell.  “When the result came back, they  told me I had a trait of it and they  needed to test his father next. Unfortunately,  he also had the trait. We  didn’t believe it at first, so he did  the test two more times and they  all confirmed the same thing,”  Campbell.  From this moment, it was imminent  that Jamel was going to have  the sickle cell disease. Subsequently,  six months after he was born, on  March 8, 2003, he was formally diagnosed  with sickle cell anaemia. This is  a disease in which there aren’t enough  healthy red blood cells to carry adequate  oxygen throughout the body. Its name is  derived from the fact that the red blood  cells become rigid and sticky and are  shaped like sickles or crescent moons.

Luckily for Jamel, his nuclear-structured  family was determined to fight the disease  together, and their first test would come four  months after his diagnosis. “I remember  putting him to rest on his father’s chest  and he said to me, ‘Jamel stomach didn’t  feel right.’ When we carried him to the  doctor, we were told that his spleen became  very hard due to blood flow complications,”  his mother recounted.  This resulted in Jamel undergoing a  splenectomy, a surgery where someone’s  spleen is removed, in June of 2004 at 15  months old. The family was also given a  treatment outlay as well as some of the  challenges Jamel was going to inevitably  encounter.  Fortunately for Jamel, he was very disciplined  with taking his treatment and his  bouts slowly began to reduce as he attended  primary school. “I have to pay attention to  the colour of my urine to determine whether  or not I needed to drink more water. The  same has to be done for my body temperature,  which means I had to keep myself warm  or my joints will start hurting immediately,”  revealed Jamel.

Being very intrinsically motivated, Jamel  refused to allow his periodic bouts of severe  pain to restrict his academic performance at  primary school. “I tried my best not to miss  any day from school, but there were times  my back would pain me a lot, especially in  the evenings. My mother had to rub it tirelessly.  This and the paracetamol would usually  do the trick, though,” he lamented.  He also voiced his initial displeasure at the  fact that his condition restricted his ability to  participate in physical activities. “I always  love football and really wanted to play for my  school, but my mother said no, due to my  sickle cell. At first I was so angry but eventually  i started to understand more; plus there  were some afternoons when I was in a lot of  pain.”  Due to these afternoon pains, it was hard  for him to study when he was home, so he  capitalised on his school time and learned as  much as he could. This allowed him to maintain an above-average grade  and culminated with him being  selected head boy for Unity Primary  School.  This was a mantle he proudly  accepted and had no intentions of  it just being a titular title. “One of  the first things I started working on  was the discipline. A lot of students  were coming late to devotion  because they were outside buying  candy, so I rounded up my prefect  body and put a stop to it,” reminisced  Jamel.  By the end of his primary-school  tenure, his leadership skills were  undisputed, but it was his other  talents that many persons were surprised  at. “My father taught me to  play the keyboard at a very young  age and I just kept practising.  Somewhere along the way I picked  up the drums, and I fell in love with  both instruments,” said Jamel.  He would exhibit his musical  prowess at his primary-school  graduation, where he played a musical number on the keyboard  and his father was the resident  pianist. It was a final bid farewell  as the Jamaica College-bound  student, who got a 94 per cent  GSAT average, serenaded his  peers.

Entering high school brought new  challenges that came in the harshest  manner. One of the side effects of  the disease is that persons develop  physically at a slower rate than average.  For a petite-size Jamel, the cascading  satirical remarks about his  height increased every day. “When I  was in first form it affected me a lot,  because it didn’t just come from  classmates, it came from adults in  the wider society,” he said.  Not one to fold easily by these  remarks, he focused more keenly  on his school work and made the  honour roll in grade seven. It is a  position the fourth-former still currently  holds as he is now concentrating  on his two-year journey for  his CSEC examinations.  “I am really happy to be on the  honour roll, because I put in a lot  of work and I don’t see myself  falling off anytime soon. The truth  is, I don’t like to study at home  because I always fall asleep, so I  try to be very attentive in class,”  Jamel jokingly said.  He also considers it his first  major step of fulfilling his dream of  becoming a paediatric surgeon.  “Clearly, what I experience as a  child growing up made me have a  lot of sympathy towards kids. It  doesn’t have to be only sickle cell  kids, I also want to help children  with other illnesses.”