Martin Thomas Using his autism to shape his art 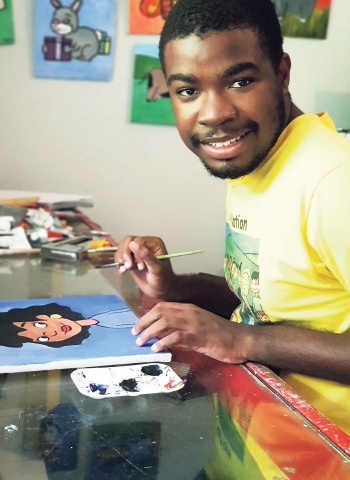 For Martin Thomas,  who came to Jamaica at  eight months old, his  path to finding his  purpose has been a  contorted one with  many discouraging potholes.  “He could not talk up to age  four, and I became extremely  worried, so I took him to a doctor  where he was diagnosed with highfunction  autism. Of course, all this  was so new to me. I was in total  shock,” revealed Janice Hall  Thomas, Martin’s mother.  This news came three years after  his mother had made a conscious  decision to return to Jamaica after  living in England for 28 years.  “My husband and I wanted our  kids to grow up in a culture where  they would see more positive  images of black people. At the  time, most of the public images of  success in England were white;  this didn’t sit well with me,” stated  the mother of two.  Nonetheless, she didn’t expect  to be faced with such a daunting  task in 1999 when she got the  news of her child’s autism. In a  general sense, it is described as a  neurodevelopmental disorder  characterised by impaired social  interaction, as well as impaired  verbal and non-verbal  communication. One of the most  implicative aspects of this is that  Martin would have challenges  forming sentences, which would impede his ability to communicate with  others.  Not one to easily give up, his mother  started looking for possible solutions for  Martin to get a substantial education  given his condition. “At that time, no one  in Jamaica knew anything much about  autism, so we were like a fish out of  water,” she recollected.

TRYING TO ADDRESS THE ISSUE

The first proposal she got from a  psychologist was to contract the services  of a speech therapist, who would work  with Martin for 20 minutes once a week.  However,  the logistics  of this was  totally  impractical,  as they lived  in Montego  Bay and the  therapist  was in  Kingston.  “This was a  period  before the  highways  were built, so it took us about four and a  half hours to get to Kingston, which was  taxing on me because we could only see  the specialist in the evening. Hence, we  were driving back in the night, for a total  of eight-plus hours for the round trip,”  lamented Janice.  As for Martin, he continually displayed  hyperactive behavioural patterns up to  age two, where he would constantly run  around the place, especially at nights.  This made the adjustment even harder for  his sleep-deprived mother, who was also  raising his older, five-year-old brother.  Like any child, he needed to broaden  his social experience, hence he was  enrolled in a preparatory school at age  four, where he was around other kids his  age. However, this was very challenging as  they found it hard to interact with him  and would often alienate him.  He was also met with a similar  treatment from his teachers, who would  put him in a corner, away from the other  kids, sometimes for the entire day. It was  in these corners that Martin began  drawing to pass his time, as he showed  very little interest in the traditional  academic lessons being taught.

His mother quickly realised that the  school was not equipped to deal with a  child with autism and so she looked for  somewhere else. This time, to avoid him  being ostracised, she altered his  biography, stating that he had a speech impediment but his cognitive skills  were intact.  It worked to her advantage as  the teachers at Emann Prep School  on Sunset Boulevard would sit  with him and engage him in  intuitive ways. “This was like a ray  of hope for me, because he had  one teacher for three consecutive  grade levels who had so much faith  in his ability. I knew it boosted his  confidence,” Martin’s mother  stated.  After assimilating himself in the  school environment, by age 12 it  was time for him to sit the GSAT  exams, a standardised test which is  used to place students in secondary  schools. Unfortunately, he did not  display the required aptitude to be  successful in the exam, so the  school kept him for an additional  year until his family could figure  out the next move.

ANOTHER STEP TOWARDS HIS PASSION

In all this cloud of uncertainty,  what became apparent was that  Martin was both visually and  musically inclined. He would  spend most of his days drawing,  and whenever he heard a song that  he liked, he would find the notes  within minutes on a keyboard.  This led his family to look for a  private high school that could  capitalise on his intelligence and  develop these skills. Sadly, this  would prove to be another  insurmountable challenge, as the  first high school he was enrolled in  gave him traditional subjects to  undertake. This discouraged  Martin, and his interest once again  began to wane. This continued for  a couple of years until he was 16,  when his mother was finally  convinced that his existing  educational programme was  causing more harm than good.  She then developed a new  strategy and paired him with an art  teacher, Elgo Lewis, who started to  showcase Martin’s work at his  exhibitions. This motivated  Martin, and he began to invest  many hours in honing his skill.  Soon, he started showcasing his  famous art pieces islandwide.  Now, with the support of his  ‘momiger’, he has his own website  where persons can purchase his art  along with paraphernalia which  feature his work.  While he is mostly able to  construct simple sentences, with a  preference for closed-ended  questions, it is clear that Martin has  found his niche in life. Likewise, his  love for music has not changed as  he is the resident Sunday-school  pianist at St Augustine Church in  Coral Gardens.  As for his mother, every day she  sends her prayers up to God for  helping her to find a path that has  given her son a sense of pride and  purpose. “I am so grateful to God,  because now I can see a way for him  to earn a living while being a  meaningful contributor to society.”