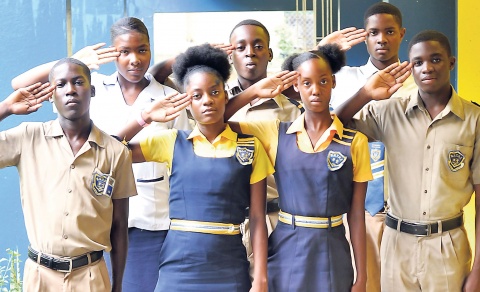 A few members of the cadet team.

Even in inclement weather, Youthlink ventured to the parish of St Ann to distinguish Marcus Garvey Technical High School from all other high schools in Jamaica.

When it was established as St Ann’s Bay Junior Secondary in September1971, there were 14 teachers, and 780 students were enrolled from grades seven to nine. In the early years, much emphasis was placed on the self-help projects and, as a result of this initiative, many developments were put into place, where infrastructure was concerned. By 1975, a shift system was introduced; the school population had grown tremendously and it was upgraded then renamed Marcus Garvey High.

In 1981, a straight-day system of classes was reintroduced, which paved the way for more productive lessons at the time. The school later went through yet another major change by becoming a technical institution. In 1998, the student population stood at 1,775, and with this number of students, the school was again forced to reintroduce the shift system to accommodate 2,200 student by 1999. The most recent change came into effect in 2012, with a one-shift system from 8 a.m. to 3 p.m. This is a result of having two campuses: the Mansfield campus in Ocho Rios for grades seven and eight students, and the main campus in St Ann’s Bay, the original site, for grades nine to 11.

As with all of our school tours, Youthlink gave the opportunity to the school community to declare why it stands out among the rest. Acting principal Richard Williams was quick to boast about the dramatic improvement in the school’s level of discipline, which currently makes it a school of choice. Also, the performance in sports is something to be proud of, with Marcus Garvey consistently ending on top of its division in the daCasta Cup and cricket competitions. Davion Coombs was also praised for his performance in the Career Advanced Programme, with the second-highest score in logistics islandwide.

The school’s major hurdle has been the lack of parental involvement throughout the academic year, which poses a problem for both teachers and students. Additionally, it would be ideal to merge once more and be in one location so that the teachers would not have to be travelling from campus to campus to conduct classes.

In his closing comments, Williams expressed gratitude to past principals Leslie Riley and Monica McKyntyre for their contribution to the school’s development and for laying the foundation which has paved the path for its current productivity.