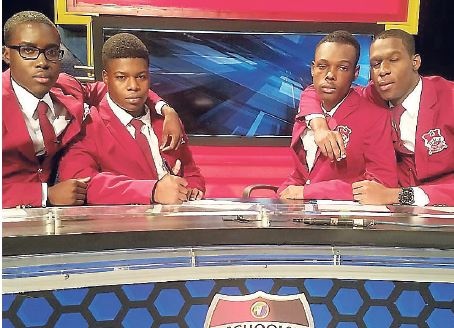 Week eight of the Schools' Challenge Quiz competition was a very intense week of competition with a few surprises here and there. Let's start with the penultimate match of the week - match 44 between Campion College from St Andrew and Montego Bay High from St James.

The contest got off to a good start for both teams, with Campion securing seven points and Montego Bay just behind on four points. However, things took a turn in the speed section when Team Campion answered almost all the questions posed to them. Montego Bay, on the other hand, managed to secure 11 points and at the end of round two, Campion was on 29 points, 14 points ahead of Montego Bay, who was on 15 points.

Things remained the same throughout the buzzer section, with Campion College dominating the final round of the contest. At the sound of the final bell, Campion came out the winners with a whopping 61 points to Montego Bay's 13 points.

The results of week 8 matches

Neck and neck, but Ardenne wins

Another intense match, and probably the most intense of the season, was that between Ardenne High and Mona High. This match kept members of the audience on the edge their seats and engaged from the start to the end of the much-talked-about match.

The contest started out very close with Mona securing seven points, one point behind Ardenne, who ended on eight points at the end of the opening round. Both teams made use of the speed section and questions were answered at the drop of a hat. However, Ardenne widened the lead on Mona, but the very determined members of the Mona team were not deterred by the margin.

Going into the final challenge, Ardenne was ahead on 31 points with Mona on 22 points. This is where palms began to sweat, the biting of nails and tapping of feet began, and nerves filled the studio as both teams took turns answering questions and with about one minute left in the game Mona was right behind Ardenne. And for every contest, there is the team that triumphs and the other that is defeated. Ardenne walked away triumphant at the end of an enticing buzzer section.