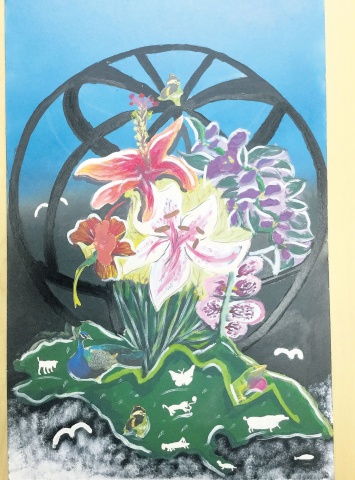 What do Jahiem Davis, Joshua Alleyne and Ryan McDonald have in common? Apart from being students of local high schools, they have an appreciation for art, an abiding love for painting, and an interest in the development of Jamaica.

The three recently secured top spots in the World Bank Group (WBG) Schools Painting Competition, held under the theme ‘55 Years of Partnership to end Extreme Poverty & Promote Shared Prosperity’. The young painters used their artistic skills to tell their story of World Bank support and resulting gains for Jamaica in various spheres over the past 55 years.

First place went to ‘It’s Flora and Fauna’ by Jahiem Davis of Horace Clarke High School. He won US$1,000, a trophy and a certificate of participation with his colourful piece combining the flora and fauna of Jamaica with the stylistic globe of the WBG logo and a map of Jamaica, alluding to the bank’s support to the preservation of the environment.

Joshua Daniel from Campion College earned second place with ‘Transforming Lives’. He used a young boy’s face to portray “before and after WBG initiatives” – painting the left side in dark and light greys with pale eyes, “not seeing the positives of the world”, and the right side, a sunny orange/brown, “seeing the world through new eyes” opened up by improved education access and new opportunities. He received a trophy and certificate of participation.

The third-place winner was Ryan McDonald of Seaforth High School with his piece, ‘People’. He combined visuals of the WBG globe, children and adults – a reference to the bank’s funding of the Government of Jamaica’s Programme of Advancement Through Health Education. This is a conditional cash-transfer initiative which delivers social assistance benefits to the most needy in the society. He also received a trophy and certificate of participation.

For World Bank Country Manager of Jamaica Galina Sotirova, “The painting contest was a compliment to the Government’s commitment to promote opportunities for all Jamaicans and an opportunity to celebrate 55 years of development achievements and strong partnership between Jamaica and the World Bank Group.”

Chief judge, art market researcher Tamara Williams, said that the competition was evidence of the enormous talent of young Jamaican students, and the judging panel was “very pleased with the variety of styles used by the painters in articulating the theme of the competition”.

All seven winners of the World Bank School Painting Competition will participate in the 2019 KingstOOn Animation Festival, an international animation conference, marketplace and festival presented by the Office of the Prime Minister in partnership with the World Bank. Scheduled for April 5-7, 2019, the event is aimed at catalyzing the growth of the animation industry in Jamaica to attract the attention of potential international clients for animation services which can be provided by talented Jamaicans.

The 55 years of partnership between the WBG and Jamaica has contributed to the development of several sectors, including education, social services, infrastructure and technology. Since becoming a member of the WBG, Jamaica has benefited from 149 operations with total financing of approximately US$3 billion, as well as an additional US$139 million in grant funds.