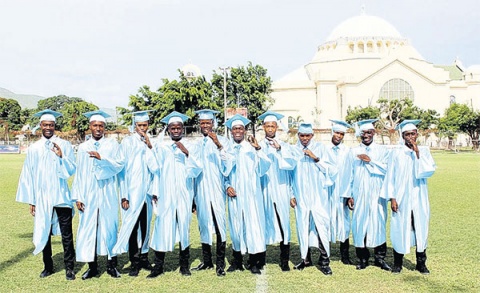 On Sunday, September 1, 2019, St George’s College launched the celebration of its 170th year with a Mass of the Holy Spirit, held at The Cathedral of the Most Holy Trinity. Mass was celebrated by the Most Rev Kenneth D. Richards, DD, archbishop of Kingston. He was assisted by visiting Bishop of the Keta-Akatsi Diocese in Ghana, the Most Rev Gabriel Doe Kumodji; the Very Rev Christopher Llanos, SJ, regional superior of the Society of Jesus in Barbados, Guyana and Jamaica; Rev Fr Rohan Tulloch, SJ, acting Jesuit superior and chairman of the board of St George’s College; and other priests and deacons – a number of them graduates of St George’s.

The theme for the year of celebration is ‘Living the Legacy, Impacting Lives; 170 Years and Counting’. Appropriately, in keeping with the theme, present at the service were many outstanding graduates of the college, including Deacon Ronald Thwaites, member of parliament of Central Kingston; and Dr Trevor Munroe, both of the class of 1959 and both Rhodes Scholars. Presidents of three of the school’s alumni chapters were also in attendance. New Georgians – incoming first-form and sixth-form students and their parents – were welcomed and encouraged to live the legacy of the mission of St George’s College by becoming men of conscience, competence and compassion who assume positive leadership positions and transform societies.

As a fitting close to the celebration, principal Mrs Margaret Campbell was presented with a citation for her milestone achievement of being the longest-serving principal of St George’s College, having completed 13 years of service this year. Mrs Campbell became the first female principal of the college in 2006. Her family’s rich legacy of attendance at St George’s includes her grandfather, father, husband, son and brothers. Her father also served as the school’s first lay principal in 1981. Under Mrs Campbell’s leadership, the college achieved CXC pass rates of over 90 per cent this year. Mrs Campbell is the LASCO Ministry of Education Youth and Information Principal of the Year.

Fundraising projects for the year are aimed at implementing solar electricity, updating the library, securing a new school bus, upgrading the science labs, and having a new public address system. Old boys and friends of St George’s College are invited to participate fully in the celebratory events for the year. Information on these events may be obtained from the school’s social media platforms @ stgc_official on Instagram, St George’s College on Facebook and the school’s official website at www.stgc.org.